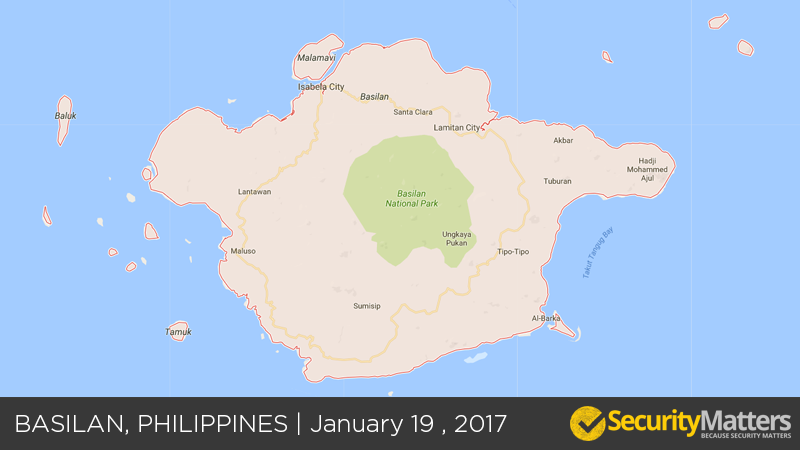 Basilan, Philippines – Army Special Forces and members of the Abu Sayyaf Group (ASG) Basilan faction figured in a firefight on the morning of January 13, 2017. The encounter happened near Barangay Cabcaban in the municipality of Sumisip, Basilan Province. Ground forces were aided by artillery and airstrikes by Huey helicopters.

The exchange of gunfire, which lasted for more than nine hours, left one Army Special Forces officer dead and four others wounded. Captain Clinton L. Capio from the Philippine Army Infantry was killed-in-action; he was the commanding officer of the 1st Special Forces Company (1SFC), the 4th Special Forces Battalion, Special Forces Regiment, and Special Operation Command, Philippine Army. Those wounded were identified, as Sgt. Gilbert C. Dumlao, Joel M. Manual, Marvin R. Indog, and Arthur Jimenez all of whom have been extracted and are recuperating. Casualties from the ASG have not yet been confirmed as reinforcements are still searching for bodies in the area.

The encounter occurred while the 75-man Army unit was on a combat operation. Around 60 fully armed ASG fighters under the command of a certain Furudji Indama (a.k.a. Abu Dujana) fell upon the unit. The ASG fighters were based in the municipality of Sumisip. Also said to have used the municipality of Sumisip as his base of operations was Isnilon Hapilon, commander of the Basilan faction of the ASG, Hapilon is also recognized as the Islamic State emir for Southeast Asia with a US$5-million bounty set by the United States Government

Other intelligence reports have indicated that in the past weeks Isnilon Hapilon, along with around 30 armed men, traveled to Mindanao proper, in order to collaborate with the Maute Group (Daulah Islamiyah DI) near Butig, Lanao del Sur. Security Matters sources say that the two groups are planning to stage terror attacks in northern Mindanao, especially in urban areas. Cities said to be targeted are are Iligan and Cagayan de Oro in Lanao del Norte province. The same reports warn that the said groups are eyeing vulnerable targets in Christian areas as well as Armed Forces of the Philippines (AFP) and Philippine National Police (PNP) detachments.

Sources have reported that another Mindanao-based group, the Bangsamoro Islamic Freedom Fighters (BIFF) Bongos faction, who are linked to the Islamic State, have allied themselves with the Maute Group.

Early this January, the BIFF made several attacks on AFP outposts around provinces in Maguindanao, the same group is also believed to have launched the attack on the North Cotabato District Jail in Kidapawan City during the same period.

The Department of National Defense announced on January 9, 2017 a plan to eradicate Islamic State-affiliated groups in Mindanao. Their primary targets are the Abu Sayyaf Group and the Maute Group, within six months. Seemingly determined to fulfill said plan, government security forces killed one Commander Tokboy, a leader of another Islamic State-linked group, the Ansar Khalifah Philippines (AKP) whose base of operations is in the SOCCKSARGEN region, South Mindanao. In a similar operation, one foreign-born AKP bomb maker was recently killed.

The AFP, PNP, and other government security forces will have to band together in force, firepower, and intelligence to totally eradicate the threat of terror in the country all the more with the Islamic State of Iran and Levant (ISIS) slowly creeping into the Mindanao area. It’s time to nip this in the bud.