We take this time to remind everyone to be circumspect about any reports that claim advanced knowledge on acts of terrorism. Avoid being a conduit of needless fear and panic; do not share or repost unverified reports on social media or through text messages.

Earlier this week, social media and personal text channels were bombarded by so-called confidential memoranda warning against planned terror attacks to be carried out by factions of the Maute Group and other sympathizers. The memos claimed to come from various government security units in Metro Manila.

At this time, it remains unclear if the widespread circulation of these “terror attack” memos was deliberate or was merely fueled by a panic-stricken populace. Whether merely a prank or the more insidious deliberate attempt to sow fear among Filipinos already leery of recent terror incidents, what is clear is that the contents of the supposed “terror attack” memos remain unverified and should not unduly concern the public.

For the public’s reference, we are pinpointing the advisories that cannot be verified, as follows. One version of the memos cited a Field Information Report from the 4th Infantry Division based in Cagayan de Oro City and was supposedly circulated by the PNP Provincial Director of Misamis Oriental. Another version cited an SMS message from the PNP Regional Director of Region 6 and was supposedly circulated by the Provincial Director of Iloilo Police Provincial Office. Although the supposed originator and source reference varied from one version to another, the common theme revolved around the following:

The same report apparently reached the PNP Aviation Security Group (Avsegroup), which immediately placed the four major international airport terminals in the country on tight watch. Avsegroup’s version of the “terror attack” memo (though unsigned) was also wildly circulated and shared on Facebook and Twitter.

Another “terror attack” memo involving the Special Intelligence Branch of Valenzuela City was also circulated in various social media platforms. The content was different from those cited above as the report mentioned specific places as targets of the terror attack (Trinoma, SM Malls, Quezon City Circle, Quiapo, and Makati City). This memorandum’s authenticity was later confirmed by the National Capital Regional Police Office (NCRPO) but clarified that the memo was based on unverified information and was only meant for police units to verify the information. The NCRPO clarified that it was not meant for the public.

NCRPO chief Director Oscar Albayalde ordered an investigation of the Valenzuela City police after the leak of a confidential memorandum. Albayalde appealed to the public to refrain from spreading baseless information, especially those uploaded to social media. 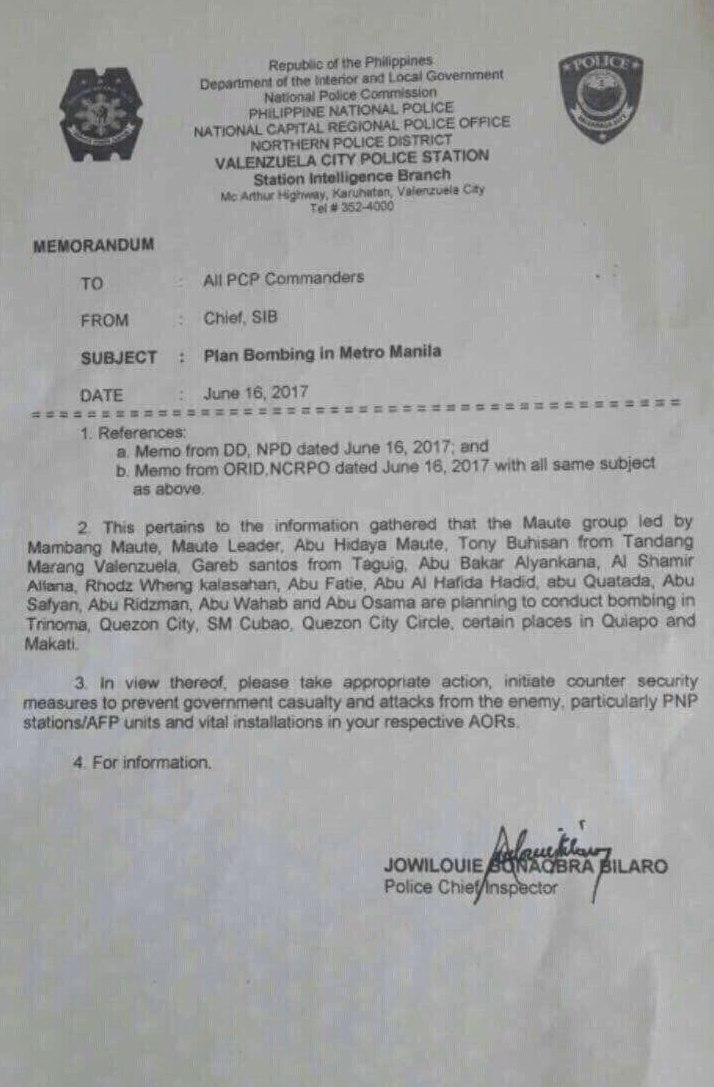 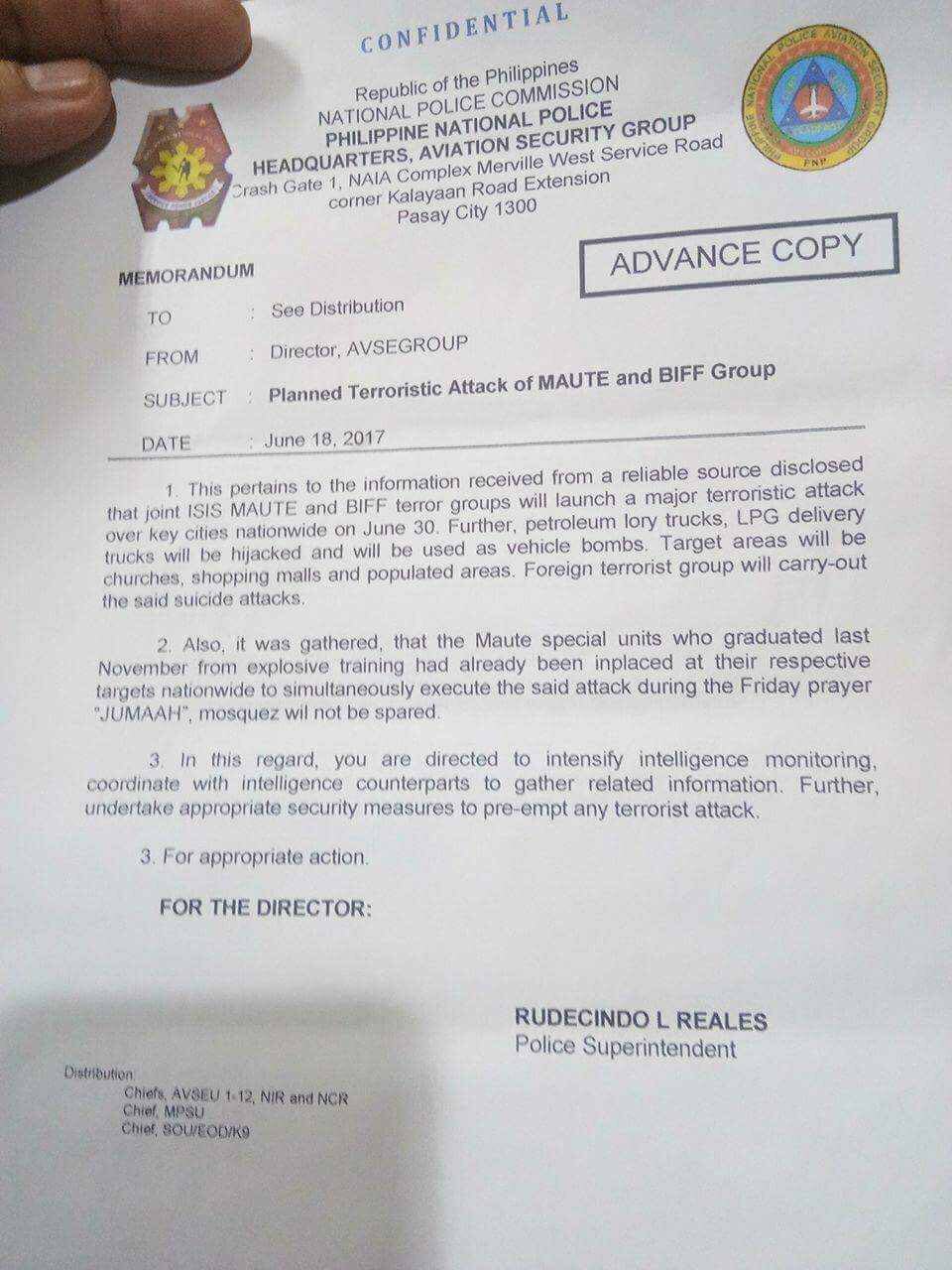 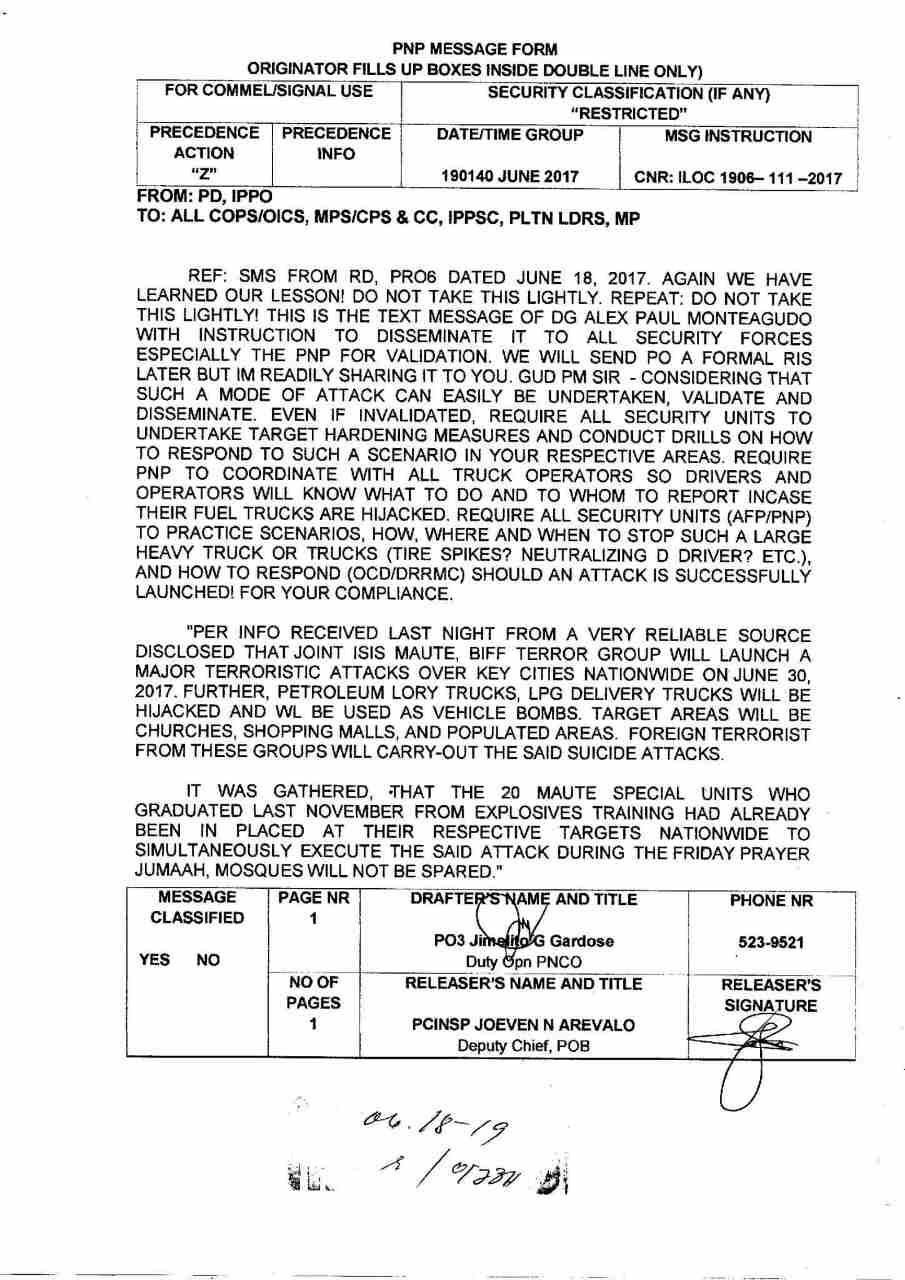